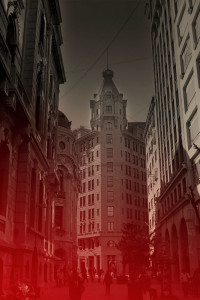 The rain brought silence. A victim’s silence. It was one of the few showers that fell on San Martin and to Detective Suarez’s dismay, it had fallen last night, washing away with it vital evidence. Rain was the enemy of any crime scene. Suarez was fifty two, grey haired and wore rimless glasses. He preferred to be alone at a crime scene for a period of time, but today was different. There was a young constable on his team.

He was aware of the young constable, Miguel, looked pale. The first crime scene is hard to prepare for. Suarez walked around the body to get a closer look at the girl’s face. He guessed 19, maybe 21 at most. Her eyes were closed and her mouth only slightly apart. There was a smear of bright red lipstick on one side of her face, otherwise her expression was peaceful.

The crime photographer arrived. Suarez cursed silently. Domingo bounded out of his car in the usual manner – hair unkempt and tucking his shirt into his trousers as he walked. His camera was tucked under a sweaty armpit as he approached the detective. When Domingo stood next to Suarez he was short of breath from the short walk and his weezy sounds annoyed Suarez but said nothing.

‘Hey’ said the photographer as casually as if they were waiting for a bus. Suarez only glanced at him then squatted on his heels to inspect the girl closer. He could hear the constable speaking on his mobile to someone at head office. He was giving directions to the location where they were.

‘Off highway 45’ he said. ‘take a left at the gravel road and drive for a mile or so’

Suarez tried to ignore the constable’s nervous chatter and the flash of the photographer’s camera as he searched her body for any clues. Her clothes were intact from what he could see. She was wearing a floral dress, the buttons done up all the way to her neck. She had long light brown hair that clung to her face and shoulder still glistening from the rain. Her skin was clear of any blemishes. Her finger nails intact – the nail polish unchipped. She had high heels – black. The soles showed only a little dirt. She reminded him of his daughter. The way she dressed and even the length of her hair were similar, but he pushed that thought away as quickly as it came.

He stood up and took a moment to survey the surroundings. Flat land in every direction. The unsealed road where they had entered ended right about where the girl’s body lay. Beyond her was the hard, barren earth, bleached by the the heat and wind most of the year. There was a pile of discarded junk; a tire, broken crate and empty bottles to one side. A place where people came to discard things he thought. His eyes looked at the girl’s body again. There was something odd about the way she was lying – it was too perfect. All around her were haphazard debris, while her body appeared so neat. Her hair, her arms and her legs were aligned beside her body. Suarez could see they had been placed that way by her killer. They had taken care to keep her shoes on. Perhaps, Suarez thought, as he walked around her once more, they’d even buttoned up her dress right before leaving.

The constable was next to Suarez, peering over his shoulder. ‘The coroner is on his way sir.’

‘Who found her?’ Suarez asked

‘A group of boys. They say they were driving home from a party in the early hours.’

Suarez scanned the open flat grounds before him. The horizon shimmered from the morning sun – the highway appeared like a hairline. A lonely truck rolled by, headed toward Santiago.

‘Quite a detour to take on the way home.’ he said

After a brief hesitation, the constable replied, ‘I think.. they were coming here to do drugs… sir.’

Suarez looked back toward the pile of junk and then the ground surrounding the girl’s body. The place had an energy of something. Of something where only wrong could happen.

He walked over to her body once more and bent over to look at one more thing that had been playing on his mind. When he was done he stood straight up with his hands in his pockets and jangled his keys, his eyes following the gravel road all the way back to the main highway. The constable remained silent as he watched Suarez. This was his first assignment with the detective and he’d been told to let Suarez do his thing.

‘Ok, Miguel, bring them in. Let’s find out more about their party and why they came here on their way home.’

Suarez walked to his car and opened the door. Just before getting in he yelled to the constable, ‘And make sure you keep the boys in separate rooms until I get there.’

He got in his car and drove back onto the highway toward Santiago.