Joan Miro: the Artist and his words 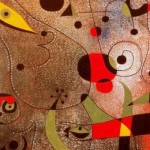 There were few artists that were as eloquent about their art as Miro. He was as poetic with the manner in which he gained inspiration as he was with his painting. Poetry in a visual form is an apt way to describe the artist work. You only have to look at his flowing lines and shapes to see this.

Joan Miro worked along side other artists such as Matisse and Picasso and his descriptions of how and why he painted are still inspirational. While studying Art History, he was an artist I immediately connected with. His child like surrealist paintings were so different to anything I had seen previously. His painting made was no attempt to depict the real world in the traditional way, instead the lines and shapes seemed to float in a dimension all their own.

Art can die; what matters is that it should have sown seeds on the earth… It must give birth to a world.